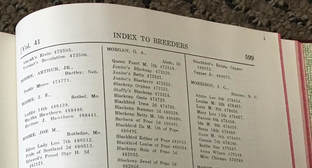 The roots of our Angus herd are deep and trace back through our mom, Elizabeth’s, pedigree. Her granddad, James Elisha (J.E.) Moore started us in the Angus business in the 1920s. For that, at its Centennial celebration in 1983, the American Angus Association honored Coon Angus Ranch as a Centennial Angus Herd, recognizing what was then 63 years of continuous production of registered Angus cattle. Today, that would equate to 98 years in the Angus business. In 2009, J. Russell Moore, her dad, was recognized with the Missouri Angus Pioneer Award.

Growing up, Elizabeth, or Liz, was active in the family’s purebred Angus operation and excelled in 4-H. When the Missouri Junior Angus Association was organized in Monroe City, Mo., in 1956, she was elected treasurer. Fellow officers of that first state junior Angus association included Eddie Sydenstricker, president; Ronnie Rodgers, vice president; and Fred Blades, secretary.

Liz obtained a bachelor’s degree in animal science from the University of Missouri–Columbia, where she was a member of the 1961 meats judging team and the 1962 livestock judging team. She also won the Block & Bridle Little American Royal showmanship competition. Her passion for Angus and activity in the College of Agriculture were featured in the Angus Journal.

In fall 1963, she pursued a master’s degree in meat science at Kansas State University, where she met Larry Coon, a Hereford breeder from Goodland, Kan. He recalls taking note of her earlier than that, as she came through the barns at the National Western Stock Show while he was taking care of K-State’s showstring. They were married June 6, 1964, and moved to Lexington, Neb., where Larry worked as Dawson County Extension agent.

With Liz homesick for the cattle and Larry wanting to get back into production side of agriculture, they moved back to Bethel in 1967 to join the Moore, Perry & Coon operation, which included Liz’s mother, Martha, and sister and brother-in-law, Kathleen and Robert N. Perry.

When the family home burned in 1970, Liz and Larry decided to separate from the operation to focus on their life’s passion: raising a family while raising registered-Angus cattle. They purchased land that included part of the original Moore family homestead, and worked together to establish Coon Angus Ranch. For a number of years they also operated the Mark Twain Bull Test and a purebred Hampshire hog operation.

In 1976, the homestead, which was established in 1845, was recognized as a Missouri Century Farm. In 1983 the American Angus Association recognized Coon Angus Ranch as a Centennial Angus Herd. In 2009 Liz received Missouri Angus Pioneer Award in honor of J. Russell Moore. The Northeast Missouri Beef Cattle Improvement Association honored Coon Angus Ranch as Outstanding Seedstock Producer in 2007.